By definitions fusion is a combination of multiple things.  It is defined as a "merging of diverse, distinct, or separate elements into a unified whole" by the Merriam-Webster Online Dictionary.
​
Fusion bellydance is the combination of another form of dance, culture, or subculture with traditional middle eastern dance. Modern bellydance performed in most restaurants is a fusion of traditional folk dances from the Egyptian area with western Ballet and Latin dance (mostly arms and posture). Tribal style originated in the US by combining elements of folkloric dances of other cultures and the idea of group improvisation, with Middle Eastern based bellydance movements.

Either Cabaret style or Tribal style bellydance can be the base dance of further fusion. There are often more dancers who are labeled as Tribal Fusion, but not all fusion is based in Tribal and not all Tribal is considered fusion.

In Lorelei's opinion, successful fusion is a creative combination of non-Middle Eastern elements with the traditional moves of modern Cabaret or Tribal style where elements of both can be seen evenly. One should be able to recognize many traditional bellydance moves in successful fusion. The fused element should also be apparent, be it music, costuming, dance styling, or all of the above.

​Lorelei's Fusion dance of choice is Gothic bellydance. Gothic bellydance has a base movement vocabulary of Tribal or Cabaret style, with some musical and stylistic differences.  She has recently also branched into Steampunk Bellydance, embraced by many Gothic Bellydancers.

The most noticeable elements of gothic bellydance are music and costuming. Most use more modern music, such as Siouxsie And The Banshees, Dead Can Dance, Velvet Acid Christ, Corvus Corax, Ego Likeness, and the Cruxshadows, etc.. Some music used will have Middle Eastern elements, and others will not. Costuming is often more dark in color than traditional ATS or Cabaret style, but it is not necessarily all black.

Costuming and dance style often include more dramatic flair than traditional bellydance. Movements of traditional bellydance tend to be emphasized with more dramatic arm movements and popping/locking movements. Dramatic flair is also seen in the theme of the dance. The majority of Gothic bellydancers put emphasis on emotion and storytelling. This is not to say that there are not Cabaret and Tribal style dancers who use emotion and storytelling. In Gothic bellydance it is simply more prevalently. 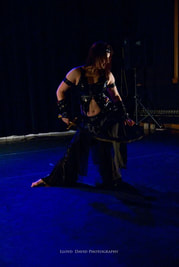 WHERE IS FUSION APPROPRIATE?

Lorelei supports the fusion of Bellydance and other subcultures, themes, and dance styles, but does not think it is appropriate in all venues.

In a traditional Middle Eastern restaurant, Egyptian Cabaret style or American Cabaret (Vintage Oriental) fit best. There are also some restaurants where Turkish style Cabaret or Tribal style are seen. The style of dance depends on the clientele of the restaurant as well as the label on the type of venue.

Fusion fits best at non-Middle Eastern style restaurants and coffee shops, where more modern music is played or performed. Fusion blend well with a rock show or various festivals. Renaissances style costuming suits as Renaissance Faires and Fairy costuming fits with Fairy Festivals. Some haflas are open to fusion while some are not, since the theme is set by the organizer. 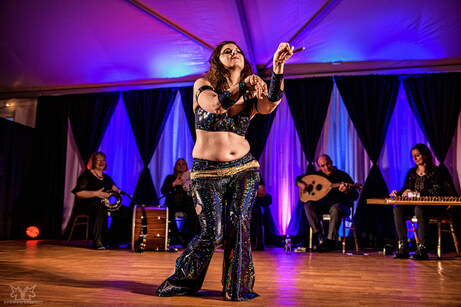