Lorelei started playing music in 2nd grade when her music class learned basic recorder. She then started flute lessons in 4th grade, and was taking private lessons in Northern NJ throughout high school. She continued with flute and performed with the concert band and orchestra during high school, seated first chair junior and senior years.

Also, during elementary, middle and high schools, she was a member of the full chorus and girls select chorus. She was also involved with several musical productions as a chorus member, dancer, minor character, and stage crew.
While at the University of Delaware she auditioned to qualify for private lessons, and continued classical flute training through college. She also used her recorder again with the Collegium Musicum, part of the Early Music Program at the University of Delaware. The Collegium Musicum performs music from the Middle Ages, Renaissance and Baroque. She also performed with the concert band and Gamelan Ensemble.

After college, Lorelei played occasionally, practicing her performance pieces from college and high school. When she started bellydance classes, she added zills to her repertoire. She wondered if she could play any of the classic songs like Zeina on flute. 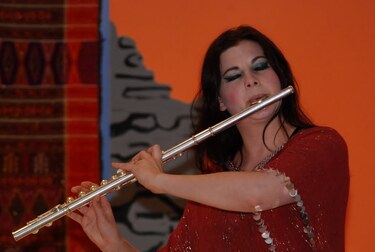 Then Lorelei heard about Jalsah.

She took doumbek (drum) class from Carmine and middle eastern song class with Melissa of Ishtar.
Now she is hooked.
Lorelei not only continues bellydance classes and performances, but is playing more often with SCA Bellydance sheet music (Melissa's site).

She moderates the drum circle at the Newark Arts Alliance and hopes to plan a Jaslah Delaware at some point in the future.

Lorelei also plans to get more Drum and Dance pot luck dinners started in Delaware. Contact her if you are interested in Jamming with a melody instrument or drum.

She is still working on Maqamat.  Quarter-tones are not impossible for a flute, but they take a lot of work.